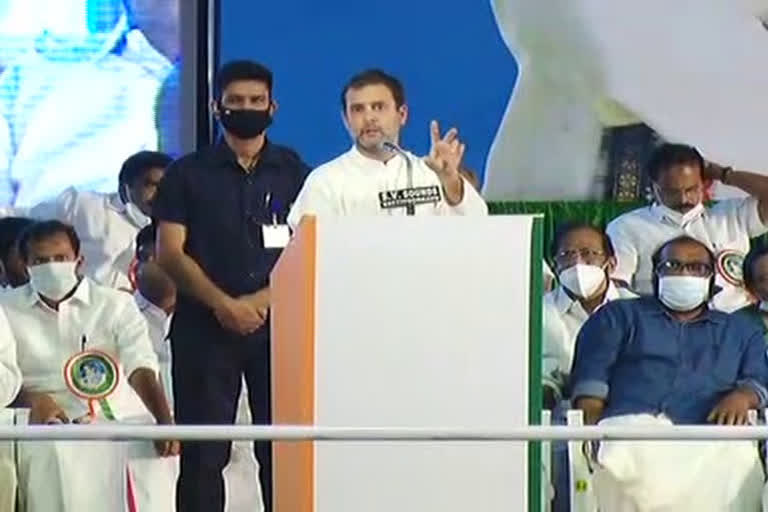 The LDF government said they uplifted Kerala, but only themselves said Rahul Gandhi, during the concluding session of Aishwarya Kerala Yatra. Everyone in the country including labourers would have to pay high price for vegetables in the future if farm laws are implemented, said Rahul.

Thiruvananthapuram: Congress leader and Member of Parliament Rahul Gandhi on Monday slammed the State and Central governments during his inaugural address at the concluding session of Aishwarya Kerala Yatra.

Rahul lashed out at the LDF government over PSC appointment controversy. He said that one can get a job in the Chief Minister's office if he/she belongs to the LDF party or else one would have to sit in front of the Secretariat. The LDF claims they have uplifted Kerala but only in favour of them, he alleged.

He also critiqued why the probe by the central agencies against a person working in the Chief Minister's office was dragging on. The UDF's manifesto is for the people and the party would sweep the polls in Thiruvananthapuram, he said.

Money taken by the Central and State governments from the pockets of the poor in the name of petrol price hike is going to the richest in the country.

The farm laws are intended to destroy farmers' market, enable big businesses to take control of vegetable prices and aimed to deprive farmers' of ample price. Everyone in the country including labourers would have to pay high price in the future, he said.

He said that this country is too great and big to be controlled by four people. The wealthiest people in the country are exempted from tax while common people suffered from demonetisation.

When labourers of the country asked for a railway ticket, Prime Minister denied it. On the other hand, he gave Rs 1,50,000 crore to the richest. Job creation in the country is stalled, he said.

Hundreds of activists participated in the event held at Shankhumugham beach in Thiruvananthapuram. All the prominent UDF leaders of the state attended the concluding session of the Aishwarya Kerala Yatra. It was led by Opposition leader Ramesh Chennithala across the state.