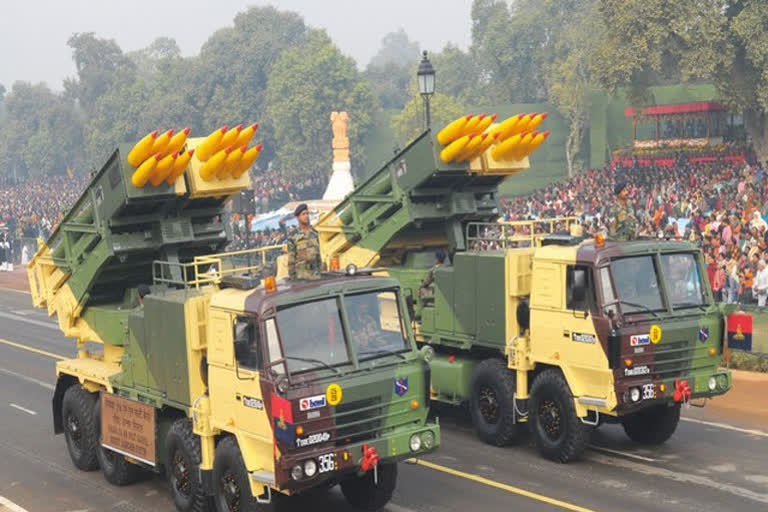 Finance Minister Nirmala Sitharaman announced an allocation of Rs 4,78,195.62 crore for the defence sector for 2021-22 as against last year's Rs 4,71,378 crore. However, the actual increase from the revised expenditure of the previous year to the budgeted capital allocation for this financial year is a modest Rs 500 crore, writes Commodore (retd) C Uday Bhaskar.

New Delhi: The COVID-19 pandemic inflicted enormous human suffering and a significant loss of life globally in 2020. This was accompanied by an unprecedented economic downturn with national economies shrinking and thereby posing a severe challenge to policy-makers who have to plan the slow path to recovery with severe fiscal constraints.

The annual Indian budget presented against this backdrop on Monday (February 1) reflected this 'belt-tightening' characteristic in most sectors barring public health and the well-being of the citizen.

Predictably, the highest increase was for public health care systems and related infrastructure and the total expenditure for FY 2021-22 at Rs 2,23,846 crore including a provision of Rs 35,000 crore for the immunisation vaccines marks an increase of 137 per cent from the previous year – and is to be welcomed. It merits recall that the world is not yet in the post-Covid phase and this transition to a verified safe zone may be a year or two down the road.

While human security or 'yogakshema' as enunciated in the ancient Indian treatise, the 'Arthashastra' by Chanakya ought to receive the highest priority, national security linked to sovereignty is an equally onerous responsibility that devolves on the elected political leadership. For the Modi government, this has been even more urgent given the Chinese transgression across the undemarcated LAC (line of actual control) in the Ladakh region in the summer of 2020.

Thus, the defence allocation for this year was keenly awaited but there were no surprises. The overall increase has been modest and from the revised expenditure (RE) of the previous FY, which was Rs 4,71,000 crore. Defence allocation has now been increased to Rs 4,78,000 crore – which is the budgeted estimate (BE) for FY 2021-22. This is approximately US $65.48 billion at the current exchange rate.

Thus, the increase from the RE of the previous year is a modest 1.48 per cent and this allocation is estimated to be 1.63 per cent of projected GDP for the current FY. Defence allocation has progressively declined from 2 per cent of GDP in 2011-12, though the professional recommendation is that to be viable and effective in nurturing a credible Indian military, this figure must move towards 3 per cent.

Given the spectrum of challenges that India has to address, it is evident that the defence sector will have to tighten the belt a tad more than it has in the past – despite the China challenge.

The capital outlay of the defence allocation for FY 2021-22 is Rs 1,35,000 crore and this is the budgetary head under which modernisation of equipment and acquisition of new inventory (such as tanks-ships-aircraft) takes place. The sub-text indicates that in the previous Galwan scarred year, the revised capital expenditure was Rs 1,34,510 crore. Hence the actual increase from the RE of the previous year to the budgeted capital allocation for this FY is a modest Rs 500 crore.

The budgeted estimate of the capital component in the previous FY was pegged at Rs 1,14,000 crore and viewed from BE to BE, the increase of Rs 21,000 crore has been welcomed as a significant 19 per cent jump. However, the more valid comparison is from the last RE to the current BE – which is a modest Rs 500 crore, or under 0.5 per cent.

The three services, army-navy-air force are in dire need of fiscal infusion to augment long-pending inventory depletions across the board. Thus, the capital allocation is a critical indicator of the operational credibility of each armed force and here the picture is bleak.

In summary, what the current budgetary allocation and inventory planning by the higher defence apex indicates is that given the current security challenges (troubled LAC with China) and related two-front exigencies, the army is to be prioritised this year. Thus, the capital allocation for the Army has increased (by Rs 3,269 crore), while that for the navy and air force has been reduced.

The inference that follows is that India's higher defence management has placed the enhancement of trans-border military capability (navy and air force) on hold for this year. Hopefully, there would be a change in orientation next year – if the Indian economy recovers in a robust manner.

Providing adequate funds for the modernisation of the military machine has been a complex challenge for the Indian political apex. While this is not an auspicious comparison – the last time India's defence allocation as a percentage of GDP was as low as it currently is - was when PM Jawaharlal Nehru was at the helm. And India was severely jolted by October 1962. History may not repeat itself, but its rhythms must be anticipated astutely.

(The author, C Uday Bhaskar is the director of Society for Policy Studies)