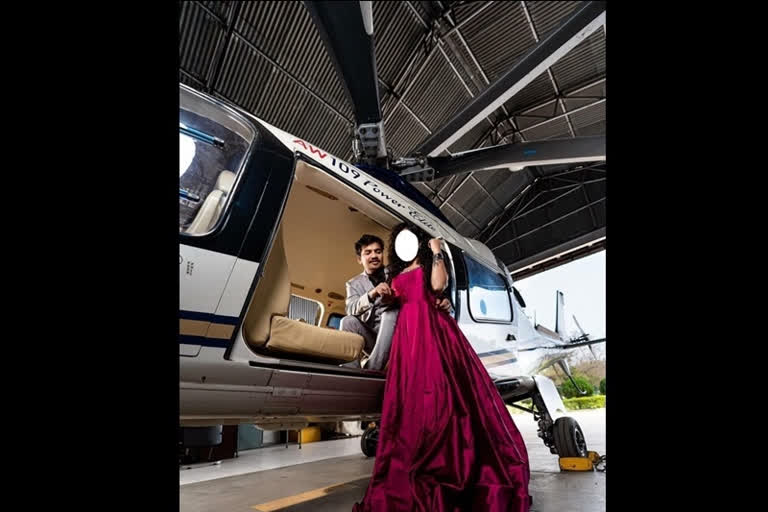 A driver in the Chhattisgarh civil aviation department was suspended after photographs of a pre-wedding photoshoot featuring BJP leader Sanket Sai and his wife posing with a state chopper went viral on social media Monday.

Raipur: After photographs of a pre-wedding photoshoot featuring Chhattisgarh BJP leader and his wife posing with a state chopper went viral on social media, a driver working in the state civil aviation department was suspended for facilitating the session.

According to reports, BJP leader Sanket Sai along with his newly married wife posed for a pre-wedding shoot inside a state-owned helicopter that was parked at the state hangar. The photoshoot has led to many questions regarding the security arrangements at the hangar.

Subsequently, the driver Yogeshwar Sai of the state civil aviation department was suspended for violating the safety norms of the state hangar.

Jashpur BJP leader Sai got married a few days ago, reached the police line hangar with his wife on January 20 and shot the wedding photo in a government chopper.

"Yogeshwar Sai, the driver of the aviation department, went to the hangar with both of them and the photos of the couple sparked controversy after those were surfaced on the internet recently," a police official said.

"Sai took the couple inside the hangar and told the guard that they have got permission. Since the guard knew the driver, he did not object and the photographs were taken," the official added.

Meanwhile, Chief Minister Bhupesh Baghel has congratulated the newly married couple by tweeting on this matter. Baghel has directed the concerned authorities to carry out an investigation into the matter and ensure such incidents do not happen.