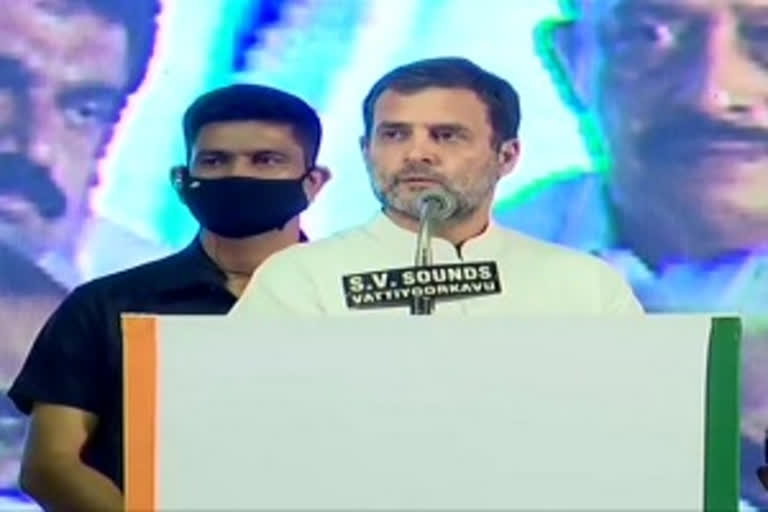 While speaking at the concluding rally of the 'Aishwarya Yatra in Thiruvananthapuram, Congress leader and Wayanad MP Rahul Gandhi said that coming to Kerala was very refreshing for him as he was used to a "different type of politics" in north India.

Thiruvananthapuram: Senior Congress leader and Wayanad MP Rahul Gandhi on Tuesday said he was used to a "different type of politics" in north India and coming to Kerala was "very refreshing" as people are interested in "issues".

Gandhi, while speaking at the concluding rally of the 'Aishwarya Yatra', led by Leader of Opposition in the Kerala Assembly Ramesh Chennithala, said he learnt a lot from Kerala and understood a bit about the "wisdom of the people" here.

"For the first 15 years, I was a member of Parliament in the north. So I had got used to a different type of politics. And for me coming to Kerala was very refreshing.

Because suddenly I found that people are interested in issues and not just superficially but going into detail in issues," Gandhi said.

Gandhi told the gathering that while talking to some students in theUS recently, he said he "really enjoys" going to Kerala because of "the way you do politics."

"Recently, I was talking to some students in the United States and I said that I really enjoy going to Kerala and really I love going to Wayanad. It's not just the affection, because the affection of course is there, but it's the way you do your politics."

"If I might say so, the intelligence with which you do your politics. So, for me, it's been a learning experience and pleasure," he said.

Gandhi, who was representing the Amethi constituency of Uttar Pradesh in Lok Sabha since 2004, contested from Wayanad constituency in Kerala simultaneously in the Lok Sabha elections of 2019.

Although he lost Amethi to Smriti Irani of the BJP, he won from the Congress bastion in Kerala.

Gandhi said the spirit of the yatra was one of humility and not of arrogance.

"We did not come to you and tell you that we know everything that has to be done. We came to you and bowed in front of you and we listened to your voice. I am happy to say that we learnt a lot from you. And it's been my experience now since I have been an MP."

"I have also got to understand a little bit about the wisdom of the people of Kerala," he said.

The state-wide tour, led by Chennithala, began on January 31 from Manjeswaram in the northernmost Kasaragod district and ended at Parassala near here on Sunday.