Many big announcements made at the Barnala Maha rally 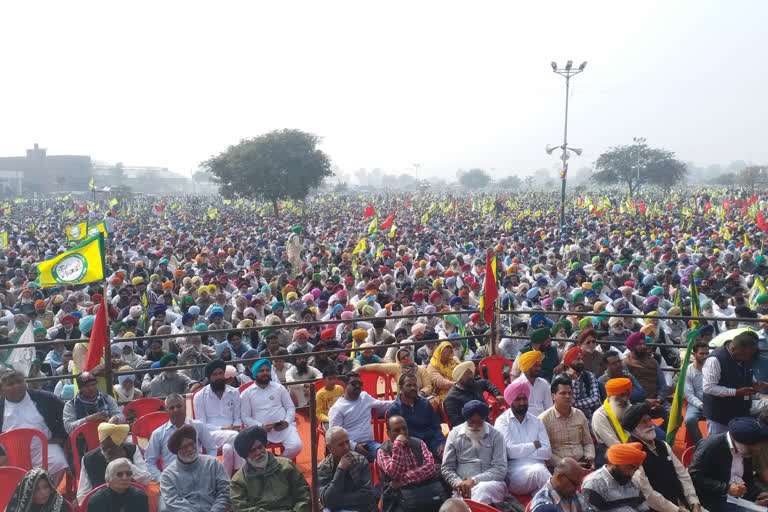 Amid the agitation by farmers to get the contentious farm laws repealed Bhartiya Kisan Union Ugrahan and Punjab Khet Mazdoor Union organised a Kisan Mazdoor Ekta Maha rally that was attended by millions of farmers from across Punjab.

Barnala (Punjab): In the ongoing struggle against agricultural laws, Kisan Mazdoor Ekta Maha rally was organized by Bhartiya Kisan Union Ugrahan and Punjab Khet Mazdoor Union at Dana Mandi in Barnala today. Millions of farmers, women, youth, labourers and people from all walks of life across Punjab attended the event.

Leaders of Bhartiya Kisan Union Ugrahan said that about two lakh people from all over Punjab had joined the rally. Therefore, the Central Government should realize that there is a lot of resentment among the farmers against the government over the agricultural laws. This has far exceeded the expectations of the rally organizers.

Many big announcements were made at the rally

From the rally stage, a series of events from Feb 23-27 has been announced by the farmers' organizations. In which Kisani Morcha announced to celebrate the birthday of Shaheed Bhagat Singh's uncle Ajit Singh on 23rd February and to be observed as 'Pagdi Sambhal Diwas' and Feb 24 as 'Daman Virodhi Diwas', essentially to underline that no repressive measure should be taken against farmers. Feb 26 will be observed as Yuva Kisan Diwas (Youth Farmers Day) and Feb 27 Mazdoor Kisan Ekta Diwas (Farmers—labourer Unity Day).

The leaders said that the Union government has to withdraw these agriculture laws at all costs, such rallies will put a lot of pressure on the central government.

Will not appear before Delhi Police or any court: Ruldu Singh

Reacting to the pictures released by Delhi Police, Punjab Kisan Union president Ruldu Singh Mansa said that he did not visit the Red Fort on January 26. He is being falsely implicated in the case. Reacting strongly, he said he would not appear before the Delhi Police or any court.

Rajewal distances himself from Deep Sidhu and Lakha Sidhana

Farmers leader Balbir Singh Rajewal said that he is not going to back down without repealing the Agriculture laws. He has never backed down from talks with the government and whenever the government invites him, he will go for talks. He said that never before had Prime Minister Narendra Modi issued a statement on any issue. The government has been deprived of sleep due to the ongoing struggle against agricultural laws. He said that it was the Delhi Police who was behind the deteriorating situation in Delhi on January 26, which has come to light. He also distanced himself from Deep Sidhu and Lakha Sidhana and said that he would pursue the cases of other youth farmers. Balbir Singh Rajewal said that if any farmer gets notices from Delhi Police, he does not need to respond.

Speaking on the stage of the Maha rally, singer Kanwar Grewal said that victory will come with unity and patience. This is how we should support the farmers' organizations, our struggle will win. Meanwhile, two songs were sung by Kanwar Grewal to inspire the gathering.