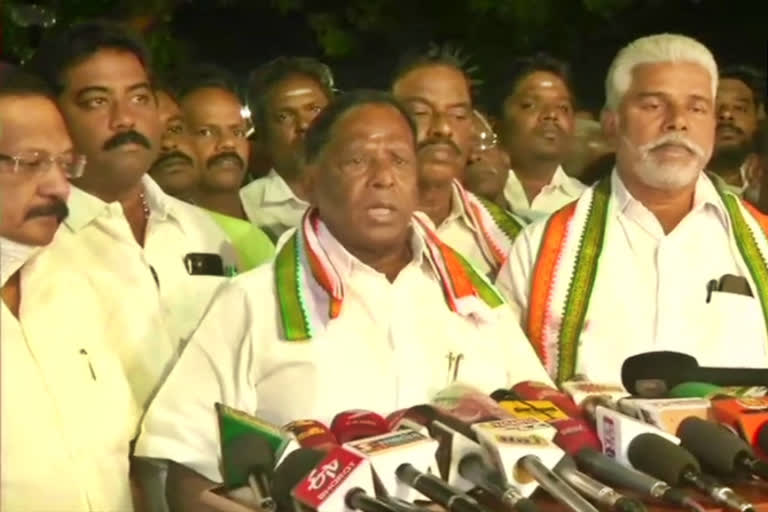 Puducherry: A day before the floor test in Puducherry Assembly, Chief Minister V Narayanasamy held a meeting with Congress and DMK MLAs to discuss further strategy.

Briefing the reporters, Narayanasamy said, "I held a meeting with ministers, MLAs of Congress and DMK, MPs and other party leaders today. We discussed the strategy to be adopted in the Legislative Assembly tomorrow. We have decided to disclose our strategy on the floor of the House."

"It was my individual decision as the party has not given me my due recognition in the government that's why I have taken this decision," Narayanan said.

Narayanan further remarked that his resignation will not have an effect on the party. He also said that this was his first term as an MLA from Congress, yet neither the Congress party nor the government gave him the recognition he deserved.

Interacting with reporters, Puducherry Assembly Speaker VP Sivakolundhu said, "I have received resignations from two MLAs. I have informed the Chief Minister and the Assembly secretary about it. I am examining their resignations."

Asked about whether he will vote during the no-confidence motion, the speaker said, "If both sides are equal then only I as a speaker can vote."

Sivakolundhu refutes any plan to meet the Governor.

On February 16, a Congress MLA from Kamaraj Nagar constituency, A John Kumar resigned from his post, citing 'dissatisfaction with the Congress government'.

Meanwhile, Puducherry Lt Governor Tamilisai Soundararajan ordered a floor test in assembly on February 22 amid a political crisis in the union territory.

Puducherry is going to Assembly polls later this year. The dates are yet to be announced.